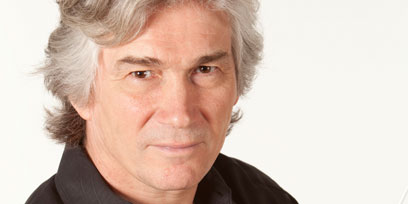 Jonathan Darlington is music director of Vancouver Opera and, until 2011, was music director of the Duisburger Philharmonic Orchestra. His passionate, yet refined, approach to music-making has done much to increase the popularity and artistic quality of both orchestras.

The hallmark of his work is a charismatic enthusiasm and acute sensitivity with regard to orchestral colour and balance. He possesses a vast symphonic and operatic repertoire that ranges from the baroque to the contemporary and has a reputation for structuring programmes that take the listener on a fascinating musical journey owing to their strong inner dramaturgical thread.

He is fluent in several languages, at home in three countries and thrives on the music making that emerges as a result of the contact with different cultures and traditions. Whether on the concert platform or in the opera house, the list of world-class ensembles that Jonathan Darlington has conducted is impressive. Most recently these include the Vienna Philharmonic at the Vienna Staatsoper, Staatskapelle Dresden, Opera Norway, the Konzerthaus Orchester Berlin, Frankfurt Opera, Duetsche Oper am Rhien, the Royal Philharmonic Orchestra and symphony orchestras in Montpellier, Bordeaux and Strasbourg. As well as several reinvitations future engagements include the Orchestra of the 18th Century and a tour with the National Youth Orchestra of Canada across the whole of Canada.

Jonathan Darlington began his career as a freelance pianist, chamber musician and repetiteur. Born in Lapworth near Birmingham, UK, he was a cathedral chorister at Worcester Cathedral and went on a music 'exhibition' to King’s School Worcester. He subsequently studied music at Durham University (graduating with a BA honours degree), and then piano at The Royal Academy of Music in London.

After graduation he moved to Paris where, as a freelance pianist for Radio France, he worked with some of the most outstanding musical personalities of our time; Pierre Boulez — Le Soleil des eaux, Riccardo Muti — Verdi’s Requiem, Olivier Messiaen – Trois Petites Liturgies, etc. His activities as an accompanist led him to work in several opera houses as a repetiteur (Glyndebourne tour, L’Opéra de Nancy, Opera North) and he became a founding member of the experimental French touring opera company ARCAL, for which he directed several productions.

During the same period he accompanied singing masterclasses at the Britten-Pears School for Advanced Studies in Aldeburgh (England), where he worked with such renowned singers as Elisabeth Schwarzkopf, Ileana Cotrubas, Hugues Cuenod, Hans Hotter, Janet Baker and Peter Pears.

He made his conducting debut in 1984 at the Théâtre des Champs Elysées in Paris, directing Francesco Cavalli’s Ormindo from the harpsichord. An important stepping stone in his career was the Berlioz Festival Lyon, where he was assistant to Serge Baudo for Les Troyens in 1987, and later to John Nelson for Benvenuto Cellini (1989).

In 1990 Myung-Whun Chung engaged Mr. Darlington as assistant and subsequently as deputy to the music director at the Opéra de la Bastille, Paris, It was there that he made his acclaimed debut in 1991 with Le nozze di Figaro, starring a dream cast including Renée Fleming and Cecilia Bartoli. He remained with the Paris Opera as deputy music director until 1993, conducting productions of Die Zauberflöte and Das Lied von der Erde. His Swan Lake with the Opéra de Paris was recorded for video in 1992.

His success at the Paris Opera led to numerous engagements with other orchestras and opera houses and he decided to return to the freelance world, this time as a conductor.

In 1996 he was invited to become part of the musical team at Deutsche Oper am Rhein (Düsseldorf – Duisburg) and in 2002 he was offered the position of Music Director of the Duisburger Philharmoniker. In the same year he also became Music Director of Vancouver Opera.

With both ensembles he has enjoyed a hugely successful relationship. With the Duisburger Philharmoniker, that success was rewarded with the German Music Publisher's prize for the best concert season 2009–10 and the Echo Klassic prize for the best concerto recording with Susanna Yoko-Henkel 2011. Jonathan Darlington also received the ‘Mercartorplakette’ in honour of his services to music and cultural life in the city of Duisburg and the region and the coveted 'Musikpreis der Stadt Duisburg in Verbindung mit der Köhler-Osbar-Stiftung' for 2011. Past recipients include Yehudi Menuhin, Alfred Brendel, Dietrich Fischer-Dieskau, Hans Werner Henze, Krzysztof Penderecki, Pina Bausch.

Jonathan Darlington is both a Laureate (LRAM) and Fellow (FRAM) of the Royal Academy of Music, London and as a French resident is proud to hold the distinction of Chevalier des Arts et des Lettres.