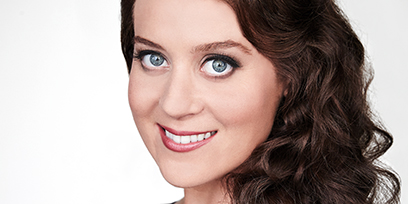 Julie Lea Goodwin is a principal soprano with Opera Australia.  In 2019, she featured as Maria in the outdoor production of West Side Story on Sydney Harbour. For Opera Australia, she revisited the roles of Musetta in La bohème and Susanna in Le nozze di Figaro and sang Madama Cortese in Il viaggio a Reims. She also created the role of Wendy Whiteley in the World Premiere of Elena Kats-Chernin’s Whiteley.  She returns to Opera Australia in 2020 as Musetta and sings Despina in Cosi fan tutte for West Australian Opera.

In 2018, Julie Lea starred as Musetta in a new production of La bohème for Handa Opera on Sydney Harbour and sang Greta in Metamorphosis for Opera Australia. Other roles for the national company have included Girofle/Girofla in Two Weddings One Bride, Princess Ninetta in The Love for Three Oranges, The Woodbird in Der Ring des Nibelungen, Voce dal cielo in Don Carlo and the title role in The Merry Widow.​

​Aged only 19, Julie Lea was invited to sing the leading role of Christine Daae in the national tour of The Phantom of the Opera – starring Anthony Warlow. The following year, she played Maria in West Side Story across Australia. The Australian called hers "the standout performance with her mixture of innocence and burgeoning sexuality."

Other highlights have included the title role in The Cunning Little Vixen for Sydney Chamber Opera and her Green Room Award-nominated performance as Grace in Annie (opposite Anthony Warlow and Todd McKenney) of which The Courier Mail said: "secretary Grace is a truly wonderful example of a gifted actress with an exceptional voice working magic".

A regular star performer at corporate events, Julie Lea sang at the 85th anniversary celebration of Jaeger-LeCoultre in Malaysia, the relaunch of Hilton Sydney's Grand Ballroom, an intimate event for Holden on the State Theatre stage and the Men of League Foundation’s Gala Dinner.

Julie Lea Goodwin is supported by Marianne and Warren Lesnie