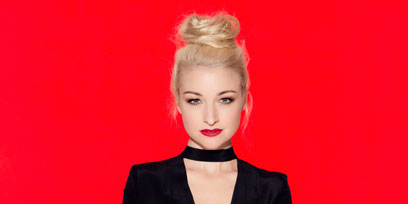 Kate Miller-Heidke is an award-winning singer-songwriter who lives between the worlds of classical music and contemporary pop.

She has released 4 albums in Australia, achieving multi-platinum status and appearing in the top 10 album and singles charts numerous times. Her latest album O Vertigo! debuted at number 4 on the Australian album charts, broke Australian crowdfunding records and was nominated for an ARIA award. Her previous albums include Nightflight, which reached number 2 on the ARIA chart, and Curiouser, which reached double platinum sales in Australia and spawned the multi-platinum hits ‘Last Day On Earth’ and ‘Caught In The Crowd’. In 2009 she became the first Australian to win the grand prize in the International Songwriting Competition for ‘Caught in the Crowd’.

Kate has toured Australia and the world numerous times, and has played at international festivals such as Coachella, Lilith Fair, Splendour In The Grass, the Woodford Folk Festival and the Byron Bay Blues Festival. She recently performed her first headline show at the Sydney Opera House as part of the Vivid LIVE festival.

Trained as a classical singer at the Queensland Conservatorium, Kate recently appeared at the Metropolitan Opera in New York in John Adams' The Death of Klinghoffer. She has performed several roles for the English National Opera, and in Jerry Springer The Opera at the Sydney Opera House. The Rabbits is her debut opera as a composer.