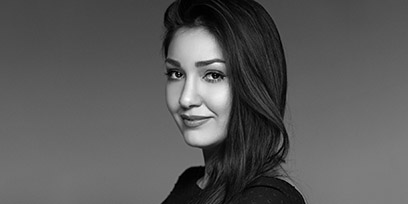 Kristina Mkhitaryan is a graduate of the Galina Vishnevskaya Theatre Studio Moscow. She went on to study with Ruzanna Lisician at Gnesinss Music College and upon completion continued her vocal education at the Gnesin Academy of Music. Kristina won 2nd Prize at the 2017 Operalia Competition.

Kristina has worked with conductors including Yuri Bashmet, Fabio Biondi, Mikhail Granovsky, Guerassim Voronkov and Jan Latham-Koenig to name a few. Recent operatic engagements have included Rigoletto, Don Pasquale and La Sonnambula at the Bolshoi and Lauretta in Gianni Schicchi at the Royal Danish Opera, I Capuleti e i Montecchi at the Bergen Opera, Il Giasone by Cavalli at the Grand Théâtre de Genève and a successful debut at Glyndebourne as Violetta in La Traviata.

On the concert platform, she has sung with the Trondheim Symphony Orchestra in the New Year’s concerts at St Olav Concert Hall and given a recital at the Bergen International Festival. Other concert repertoire has included Gorecki’s ‘Symphony No.3’, Mozart’s ‘Exsultate Jubilate’ and Vivaldi’s ‘Gloria’.