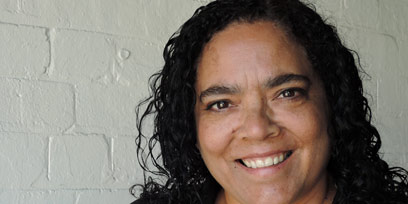 Lisa Maza (Meriam/Yidindji/Dutch) works as a professional singer, actor, and MC and has done so from her base in Melbourne for the past sixteen years.

She completed a Cert IV in Business (Governance) at VU in 2011 and is currently a member of three Victorian ATSI boards.

In 2007 she began co-writing with her sister, their autographically inspired theatre show Sisters of Gelam, which premiered at Malthouse Theatre in Nov 2009.

Earlier that same year Lisa completed a Certificate III in media at Open Channel, co-directing her first documentary Living in Two Worlds, which premiered at St Kilda Film Festival in May 2009.

Her latest documentary Mazas Got Talent screened in June 2014 on NITV for NAIDOC week.