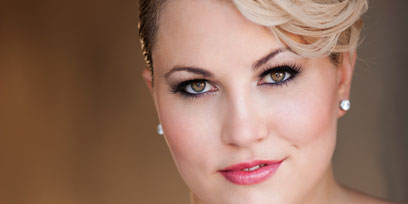 Regina Daniel is a Coloratura Soprano who studied at the Sydney Conservatorium of Music’s Opera Studio. She was a Young Artist for Pacific Opera in 2009 and 2010, and attended the Lisa Gasteen National Opera Studio in 2012 and 2013 on full scholarship. Regina has been offered a scholarship to attend the studio again in 2014.

Regina is the 2014 recipient of the prestigious Dame Joan Sutherland Award from the Australian Opera Awards Committee; a prize which will allow Regina to undertake auditions and intensive coachings overseas later this year. She has won the National Aria Competition, been a finalist in the McDonald's Operatic Aria Competition, and was recently runner-up in the MTO-German Australian Opera Grant. She has been nominated for the Dame Joan Carden Award three years in a row and has been a recipient of the Helpmann Family Fellowship twice.

Roles performed include Queen of the Night, First Lady, and Papagena in Die Zauberflöte for Opera Australia; Amina in La Sonnambula; Marguerite in Faust; the title role in Angelique; Rosalinda in Die Fledermaus; Countess Almaviva in Le Nozze di Figaro; Michaela in Carmen; Berenice in L’occasione fa il ladro; Guilia in La scala di seta; Belinda in Dido and Aeneas; Zerlina in Don Giovanni; Yum-Yum in The Mikado; Lola in Gallantry; Olimpia in Prima Donna. She has also appeared as a soloist with the Queensland Symphony Orchestra, and sang the role of Belinda in a live recording with the Sydney Conservatorium’s Early Music Ensemble in an ABC Classic FM broadcast of Dido & Aeneas.