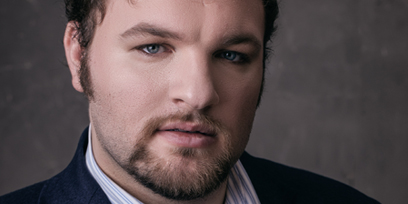 Born in Verona in 1985, he began at 11 years old his musical studies with the soprano Alda Borelli Morgan. In 2004 he took part in various concerts organized by Fondazione Arena di Verona. In 2005 he won the first prize in the "Marie Kraja" in Tirana and in 2007 the Competition "Comunità Europea" of Teatro Lirico Sperimentale in Spoleto.

Soon began a career that led him to perform in Giordano's Il Re at the Giordano Theatre in Foggia, Rigoletto conducted by M° Bruno Campanella at the Teatro dell'Opera in Rome and on tour in Japan, Il Trovatore (Conte di Luna) at Teatro Nuovo in Spoleto.

In July 2008 he made his debut as Marcello in La Bohème at Teatro La Fenice in Venice. The 2009 season has seen him involved as Marcello in La Bohème at Teatro Vittorio Emanuele in Messina, Germont in La Traviata in Verona and Florence, Cecil in Maria Stuarda and Sharpless in Madama Butterfly in Venice, Beijing and Naples. He also participated in a Gala Concert together with Plácido Domingo at the Arena di Verona

In 2010 he made his debut as Valentin in Gounod's Faust at the Teatro Bellini in Catania and was also engaged in La Boheme  (Marcello) at Teatro Massimo in Palermo conducted by Daniele Callegari, La Traviata (Germont) in Jesi, Fermo, Treviso, Simon Boccanegra (Paolo) at  Teatro Regio in Parma for the Verdi Festival and at Teatro Real in Madrid, La Fanciulla del West (Sonora) for Teatro Massimo in Palermo.

He sang in Maria Stuarda (Cecil) conducted by Richard Bonynge and directed by Pizzi at the Megaron in Athens, La Traviata (Germont) in Ascoli Piceno and in Palermo, at Teatro Comunale in Modena, Piacenza and Bolzano, at Maggio Musicale Fiorentino, in Venice directed by Robert Carsen, at the Ravenna Festival and Piacenza, directed by Ferzan Ozpeteck at the Teatro San Carlo in Naples and on tour in Hong Kong (conducted by Roberto Abbado). We also remember Lucia Di Lammermoor (Enrico) at the Teatro La Fenice in Venice, Madama Butterfly (Sharpless) at Teatro Petruzzelli in Bari, Pagliacci (Silvio) for Teatro San Carlo in Naples (with tour at the Mariinsky in St. Petersburg conducted by Donato Renzetti), Simon Boccanegra (Paolo) for ABAO in Bilbao directed by Hugo De Ana and conducted by Donato Renzetti, La Bohème in Rovigo, Padova and Venice, conducted by M° Daniele Callegari and directed by Francesco Micheli, Rigoletto in Jesi and in Fermo. He also participated in the Christmas Concert conducted by Riccardo Muti in the Senate and broadcasted in Euro vision, Don Carlo (Rodrigo) in Modena and Piacenza and a Gala Verdi with Fondazione Toscanini conducted by M° Kazushi Ono.

His recent engagements include La Traviata at La Fenice in Venice, in Macerata, at Palau de les Arts in Valencia, in Los Angeles and in London, La Bohème in Sao Paulo, Brazil, Il Trovatore at Sferisterio in Macerata, at Teatro alla Scala in Milan, Naples and in Budapest, La Bohème in Tel Aviv and Florence, La Forza Del Destino at Palau de les Arts in Valencia and in Munich, Simon Boccanegra in Venice, Lucia Di Lammermoor in Berlin and Munich, Pagaliacci in Milan, Aida at the Wiener Staatsoper, Un Ballo in Maschera in Rome.

In August 2013 he won the Second Prize as well as the Audience Award at the Plácido Domingo's Operalia Competition in Verona; in June of this season he won the Abbiati Prize.