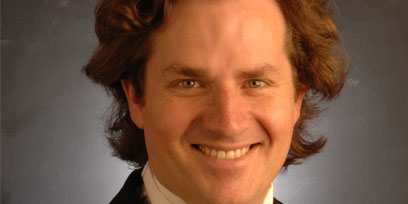 Born in Tanzania to Australian parents, Tom Woods grew up in Perth, Western Australia, where he learnt cello and piano and studied conducting with Richard Gill at the West Australian Conservatorium.  In 1989, he received a Department of Foreign Affairs scholarship to enable studies in Moscow under Maestro Vladimir Ponkin.

Returning to Australia, Tom joined Opera Australia in 1993, becoming one of the youngest conductors in the company's history with his debut A Midsummer Night's Dream at age 23 to critical acclaim. Between 1993 and 1997, Tom was Assistant Conductor for over sixty operas; assisting such maestri as Richard Hickox, Simone Young, Christopher Hogwood, Sir Charles Mackerras, Richard Bonynge and Carlo Felice Cillario.

He has also conducted numerous world premieres including John Taverner’s Lament for Jerusalem and Matthew Hindson’s Symphony No. 1.

In New Zealand, he is Chief Conductor Emeritus for the Christchurch Symphony Orchestra. He has also conducted seasons of The Magic Flute, Aida and Il trovatore for Southern Opera and appeared with the Auckland Philharmonia in concerts with Simon O’Neill and Sumi Jo.

Tom returned to OA in 2012 for Madama Butterfly and La bohème in 2013; he also won the Green Room Award for Outstanding Conductor in Opera (Of Mice and Men).  Moving to Germany in 2014, Tom is currently Stellvertretender Generalmusikdirektor at the Theater Regensburg where highlights have included Katya Kabanova, Tristan und Isolde, Marschner’s Hans Heiling and the world premieres of Anton Lubchenko’s Doctor Zhivago and Moritz Eggert’s Freax. In 2018/19 he conducted new productions of Nabucco and Lucia di Lammermoor in Regensburg and made his debut at the Staatstheater am Gärtnerplatz, Munich with Bizet’s Les pêcheurs de perles. Next season he conducts Flotow’s Martha and the world premiere of Moritz Eggert’s Freax.