Opera for One: Lohengrin

Can a heart love without doubt?
Can you trust the happiness that comes through faith alone?

Elsa stands accused of a horrible crime. She prays for a champion, and a noble knight appears. But his help comes with a condition: she must never ask his name. Does true love demand blind faith?

Lohengrin is a fantastical romance. It’s filled with shimmering string passages and angelic choruses, including the famous Bridal March. Wagner described his music as “streams of gold, ravishing the senses of the beholder.”

Director Olivier Py sets this battle between good and evil in the ruins of Berlin in the aftermath of World War II. A monumental revolving tiered set depicts a decaying theatre, where emblems of German Romanticism gather dust.

The result is a “thoughtful and audacious piece of theatre.” — Opera Traveller

Choose two or more productions to unlock a subscriber discount, along with exclusive benefits throughout the year. In 2020, heroes walk the earth. Love is all-consuming. And vengeance comes to those who wait. Explore the season. To book an Opera for One subscription package, please call our box office at 03 9685 3700. 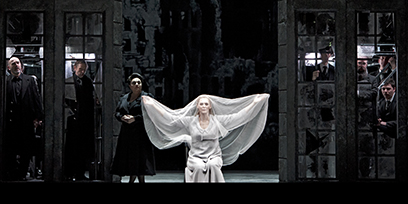 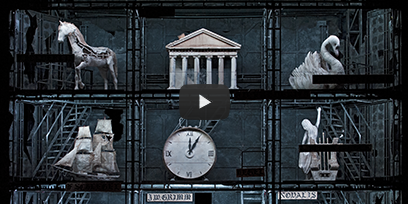 Watch the trailer for Lohengrin

Elsa stands accused of murdering her brother Gottfried, and must prove her innocence in a trial by combat against her accuser, Telramund.

She prays for a champion to appear and a shining knight comes to her aid. He makes her promise never to ask his name, and then defeats Telramund in battle.

Telramund and his wife Ortrud plot their revenge.

Elsa marries the knight, but Ortrud is determined to destroy her happiness.

Who is the mysterious Knight? And if Elsa is innocent, what did happen to Gottfried?

On the banks of the river Scheldt a herald announces Heinrich, King of Germany, who asks Count Telramund to explain why Brabant is torn by strife and disorder. Telramund accuses his ward, Elsa, of murdering her brother, Gottfried, heir to Brabant’s Christian dynasty.

Gottfried was actually enchanted by the evil Ortrud, whom Telramund has wed. When Elsa is called to defend herself, she relates a dream of a knight in shining armour who will come to save her. The herald calls for the defender, but only when Elsa prays does the knight appear, magically drawn in a boat by a swan. He betrothes himself to her on condition that she never ask his name or origin. Defeating Telramund in combat, the newcomer establishes the innocence of his bride.

Before dawn, Ortrud and the lamenting Telramund swear vengeance. Elsa appears on a balcony, and Ortrud attempts to sow distrust in the girl’s mind, preying on her curiosity, but Elsa calmly offers Ortrud friendship. Inside, while the victorious knight is proclaimed guardian of Brabant, the banned Telramund furtively enlists four noblemen to side with him against his newfound rival.

At the cathedral entrance, Ortrud and Telramund attempt to break up the wedding — she by suggesting that the unknown knight is in fact an impostor, he by accusing Elsa’s bridegroom of sorcery. The crowd stirs uneasily. Though troubled by doubt, Elsa reiterates her faith in the knight before they enter the church, accompanied by Heinrich.

Elsa and her husband, alone in the bridal chamber, express their love. Anxiety and uncertainty at last compel Elsa to ask the groom who he is and from where he has come. Before he can reply, Telramund and his henchmen burst in. With a cry Elsa hands the knight his sword, with which he kills Telramund. Ordering the nobles to bear the body to the King, he sadly tells Elsa that he will reveal his identity before the King and the people.

The King and the army assemble at the Scheldt. The distraught Elsa and her attendants arrive. Lohengrin tells the King he cannot now lead the army against the Hungarian invaders. He explains that his home is the temple of the Holy Grail at distant Monsalvat, to which he must now return; Parsifal is his father; Lonhengrin his name. The swan appears and Lohengin prepares to depart. Ortrud rushes in, jubilant over Elsa’s betrayal of the man who couId have broken the spell that transformed her brother into a swan. But Lohengrin’s prayers bring forth Gottfried in place of his vanished swan, and after naming Gottfried ruIer of Brabant, Lohengrin disappears. Ortrud collapses, and Elsa, calling for her lost husband, falls lifeless to the ground.

Opera is larger than life, and there are some themes and content in life, and in art, that can be challenging to engage with. We want to give you the information that you need to help decide whether a production is right for you and your family. If you'd like more information about what to expect or have specific questions about a production, email us at customerservice@opera.org.au or call 02 9318 8200. For more information about going to the opera, check out our ultimate guide.

This production of Lohengrin is set after the end of World War II in Berlin and contains references to Nazi Germany.

In one scene, Ortrud waves a Third Reich banner.

Director Olivier Py finds it problematic to present Wagner’s opera without reference to the composer’s anti-Semitism and nationalistic elements of German Romanticism. For this reason, he chooses to set the opera in the ruins of Berlin at the end of World War II. According to Olivier Py, Lohengrin is an opera about nationalism, not a nationalistic opera. With this production, he continues his thesis that in German Romanticism one can find the origins of National Socialism. The opera ends with a celebration of German nationalism, but the couple Telramund and Ortrud is defeated. Ortrud indeed waved a banner of a Nazi eagle during her Act II invocations, but the opera essentially tells the triumph of good over evil.