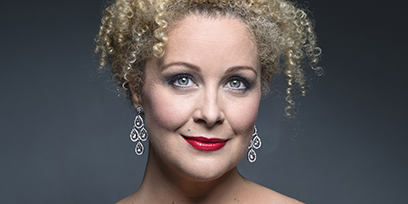 Australian Mezzo-Soprano Angela Hogan completed a Bachelor in Music Performance at The Victorian College of the Arts in 2007, and has since been captivating audiences in Australia and abroad in many and varying roles.

Hailing from Bendigo, Victoria, Angela has an eclectic musical background, having performed in a variety of musicals, jazz ensembles and even heavy rock bands before finally developing a strong passion for the opera genre.

Angela has been a member of Opera Australia’s full-time chorus since February 2018 and has covered various roles in her time with Opera Australia, including Mercedes (Carmen), Maddalena (Il viaggio a Reims), Page & Slave (Salome), Mark Smeaton/Queen’s Page (Anna Bolena) and Siebel (Faust). In November 2019 Angela performed in Opera Australia’s Opera Gala Concert at the Field of Lights in Uluru.

In 2015, Angela relocated from Melbourne to Sydney to perform for Opera Australia’s Touring & Outreach program in Rossini’s La Cenerentola, a role she had previously performed in Victoria. Angela then went on to perform in Humperdinck’s Hansel and Gretel before being offered a position in the company’s main stage chorus.

Angela looks forward to developing her craft in the coming years with the assistance of her many mentors at Opera Australia.