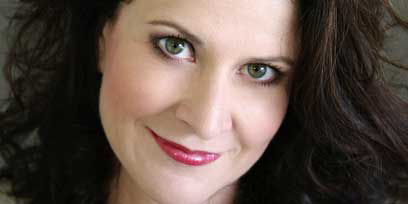 Mezzo-Soprano Deborah Humble is one of Australia’s most successful international artists.

In 2004, Deborah was awarded the prestigious Dame Joan Sutherland Scholarship and, the following year, she became a Principal Mezzo with the State Opera of Hamburg.  Her many roles for the company included Zenobia (Radamisto), Bradamante (Alcina), Hansel (Hansel and Gretel), Page (Salome), Suzuki (Madame Butterfly), Olga (Eugene Onegin) and Malik for the German premiere of Henze’s L’Upupa.

But it was for her Wagner roles in Hamburg’s Ring Cycle that she received international acclaim.  Conducted by Simone Young and directed by Claus Guth, Deborah began with Erda in Das Rheingold in 2008 and went on to sing Schwertleite in Die Walküre, Erda in Siegfried and both 1st Norn and Waltraute in Götterdämmerung.  She recorded these roles for the Oehms record label and, in early 2011, repeated the roles in two complete cycles.

In 2013/14, she sang further Ring Cycles in Hamburg, Halle, Melbourne and Ludwigshafen, sang Catherine in Honegger’s Jean d’Arc du Boucher in Lisbon, Amneris in Aida for Opera Australia, Elijah with the Sydney Symphony, Mahler’s Symphony No. 3 with the Queensland Symphony and Wesendonck Lieder in New Zealand.

Most recently, Deborah Humble has appeared in Strauss’ Elektra and Honegger’s Jeanne d’Arc au Boucher in Hamburg, Das Rheingold, Siegfried and Beethoven’s Symphony No. 9 in Hong Kong, Siegfried in Boston, Mahler’s Symphony No. 8 in Singapore, Bruni’s Symphony No. 1 (Ringparabel) in Minsk, Parsifal and Verdi’s Requiem in the UK, Bluebeard’s Castle and Elgar’s The Kingdom in Melbourne, Mozart’s Requiem in Brisbane, Tristan und Isolde in Mexico City, Der fliegende Holländer in Lille and Peter Grimes for the Sydney Symphony.  In 2022, she sings Klytämnestra in Elektra for Victorian Opera and appears as soloist with the Sydney, Queensland and New Zealand Symphony Orchestras.