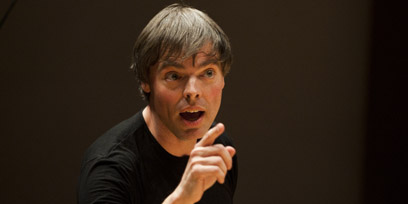 Born in Provence, Guillaume Tourniaire studied piano and conducting at the Geneva Conservatory, during which time he was winner of a first prize in the international Gabriel Fauré piano competition and awarded by the Gabriele de Agostini Foundation. His professional career started as artistic director of the vocal ensemble, Le Motet de Genève from 1993, Chorusmaster at the Grand Théâtre de Genève from 1996, and choir director of the Teatro la Fenice in Venice from 2001. This early apprenticeship has given him a rare depth and experience with the opera, vocal repertoire as well as early music, and this combined with his talent and passion for rare and previously unperformed music, has made him a highly sought after conductor on the world stage.

Tourniaire made his conducting debut in 1998, at the Grand Théâtre de Genève, in its production of Prokofiev’s opera Betrothal in a Monastery. He then appeared at the Opéra National de Paris, conducting Stravinsky’s Le Sacre du Printemps with choreography by Pina Bausch. He subsequently established a collaboration with the Orchestre de la Suisse Romande in Geneva conducting such works as the world premiere of the complete original version of Prokofiev’s music for the Eisenstein film, Ivan the Terrible—based on Tourniaire’s own reconstruction; a complete new version of Grieg’s incidental music Peer Gynt; Mozart´s incidental music Thamos König in Ägypten; Mahler’s Das klagende Lied; Prokofiev’s cantata, Alexander Nevsky; Bohuslav Martinů´s Gilgamesh; Jean-Michel Damase’s Madame de.; Janáček’s Amarus and The Eternal Gospel.

Successively nominated Principal Chief Conductor of Prague State Opera (2007), Artistic Director of the Ensemble Vocal et Instrumental de Lausanne (2011), awarded by many prizes for his recordings, winner of the Australian Green Room Awards 2015 and 2016 for best conductor, he will begin next season a major collaboration with the Malaysian Philharmonic Orchestra as Principal Guest Conductor.