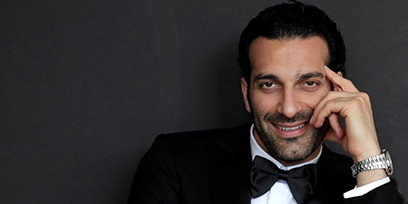 Rame Lahaj was born in Istog, Kosovo and is now considered as one of the most prominent singers in his generation. His first major success was his debut at the Hungarian State Opera in Budapest in 2011 with the role of Macduff/Macbeth. In 2016 Rame Lahaj was a prize winner in Placido Domingo’s Operalia competition.

Most notable engagements in 2017/18 include Alfredo/La Traviata with Placido Domingo at the Paris National Opera and at the Bolshoi in Moscow w. Sokhiev, where he also performed Rodolfo/La Bohème, Duca/Rigoletto at the Finnish National Opera in Helsinki and with Kasper Holten in Malmoe, a Verdi Opera Night Concert in Arena di Verona as well as international concert tours, among others with Angela Gheorghiu in South Korea and in Mexico with Orquestra Filarmonica de Jalisco.

Highlights in season 2016/17 include Edgardo/Lucia di Lammermoor at the Paris National Opera, the title role of Faust in Tel Aviv, Duca/Rigoletto with McVickar at Savonlinna Opera Festival as well as concerts in London and Mexico next to Placido Domingo.

In 2012 he performed Rodolfo/La Bohème in France at National Opéra de Montpellier. His Italian debut turned out to be a great success with the performance of Rigoletto in the role of Duca di Mantova at Teatro Massimo di Palermo.