We sent author and comedian, Rosie Waterland, to the opera for the very first time. Here’s what she thought.

Rosie Waterland was a guest of Opera Australia at Rigoletto. This is her unedited review of the experience.

My only reference point about what it’s like to go the opera, is that scene in Pretty Woman where Richard Gere takes Julia Roberts to see something very fancy, and they sit in a fancy box in a fancy theatre surrounded by fancy rich people in very fancy clothes.

That’s about as far as my knowledge base goes. Oh – I also know that Pavarotti is a thing. Along with those two other guys.

So, it surprised me more than anyone when Opera Australia asked if I would review some opera for them (note I call it ‘some opera’ – not sure that’s even the right way to say it but here we are). “You know the kinds of things I’ve written about in the past, right?” was my immediate response. “Are you sure you want someone who calls it ‘some opera’ and only knows it from Pretty Woman and will probably turn up wearing sneakers?”

I turned up wearing sneakers.

And, as it turns out, so did a lot of people. What I didn’t realise is that the opera is not exclusively for fancy people. Did you know that? I did not know that. In fact, the theatre was filled with the same crowd you’d see in a pretty standard cinema audience. Just lots of regular people, in regular clothes, all excited to catch some opera.

Rigoletto, to be exact, is the ‘some opera’ we were all there to see. And besides worrying that my sneakers were going to be out of place, I was mildly concerned that I was going to be faced with two hours of singing in another language that I didn’t understand, while I pretended to follow along with a blank look on my face (not unlike when I pretend to be interested in someone’s boring story at a party). There are actually subtitles that come up on a screen (although at the opera they’re called ‘surtitles’ – thanks Wikipedia!), so you can follow the Italian dialogue. But, if I’m being really honest, I rarely found myself checking the English translation, because the show is so damn watchable and easy to understand.

Seriously – I did not have to pretend to be interested in this. I don’t know if I’m the first one to tell you, but the opera is freaking EPIC. And Rigoletto BRINGS IT with some next level suspense. This show is like a true crime doco, episode of Law and Order and Tinder dating story all rolled into one. Seriously – it revolves around a total playa catfishing someone. Catfishing! At the opera! (I wasn’t expecting that either!) Allow me to explain.

In the opera criminal justice system, catfishing and playa offences are considered especially heinous. In Italy somewhere, the dedicated Rigoletto who investigates these vicious felonies against his daughter is part of an elite squad known as ‘scary clown men who mess everything up until the wrong person dies’. This is his story.

So, Rigoletto is a scary clown man who doesn’t want to be a scary clown man. He was born with a hunch back and has trouble walking, so the town’s Duke (whose main responsibility seems to be throwing parties and sleeping with lots and lots of women) decided that since he looks ‘funny’, Rigoletto should be the hired clown for all said parties. Yeah, the Duke is a real gem. Rigoletto is understandably bitter about this situation, so he basically just walks around all the parties saying hilarious yet bitchy things to people (so, pretty much me every time I’m drunk at a social gathering).

This means that lots of people hate Rigoletto. It also means that Rigoletto hates everyone, especially the Duke.

Now, for past few months the Duke, who is a total playa, has been catfishing Rigoletto’s daughter Gilda. (Definitions for those not down with the KIDZ: a playa is a complete fartnugget who flirts with multiple girls at a time and makes them all believe they’re individually special. Catfishing is pretending to be someone else to make someone fall in love with you. Duh.)

Sweet li’l Gilda thinks she’s fallen in love with a poor, humble, terribly dressed student. He spins a whole bunch of crap about how they’re soulmates and meant to be together forever blah blah blah – every woman knows how it goes. But alas, Gilda is still young and naïve and doesn’t realise that men will say literally anything to get laid. So, eventually, she sleeps with him, at which point (probably because she’s in a mansion) it becomes clear that he is not a poor, humble, terribly dressed student, but the rich, knobcloud, impeccably dressed Playa Duke. 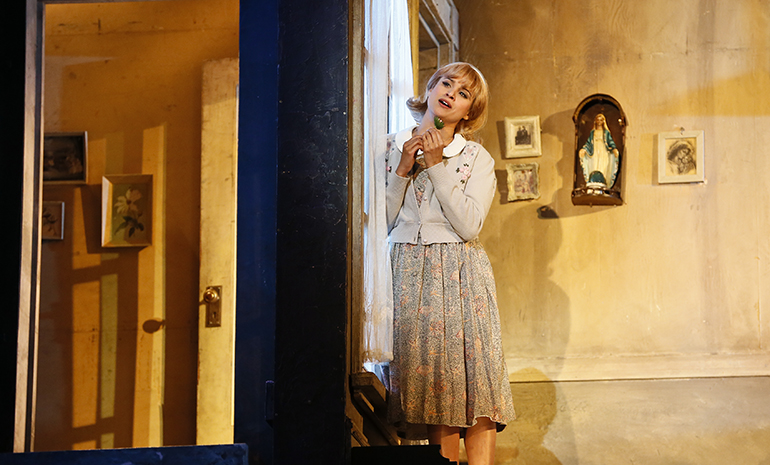 Playa Duke thinks it’s hilarious and goes off to sleep with lots more ladies. Gilda’s devo and spends a lot of time crying. Pretty much everyone thinks that Rigoletto is getting what he deserves, for being such a mean, bitchy old clown for so long. That makes Rigoletto mad at everyone, but especially his daughter, for ruining herself, because obviously a woman is ruined once she has an orgasm. (Although given it was the Playa Duke she slept with, I highly doubt an orgasm was part of the equation. For her, anyway.)

Rigoletto is crying with rage in front of the mirror (been there buddy) when an assassin casually walks past, and is like, “hey bitchy old clown, you want me to kill anyone for you today?” And Rigoletto is like, “Funny you should ask, because, yes, actually, I would like somebody killed today.” So those two make a deal that the assassin will kill the Playa Duke and deliver him to Rigoletto in a sack. 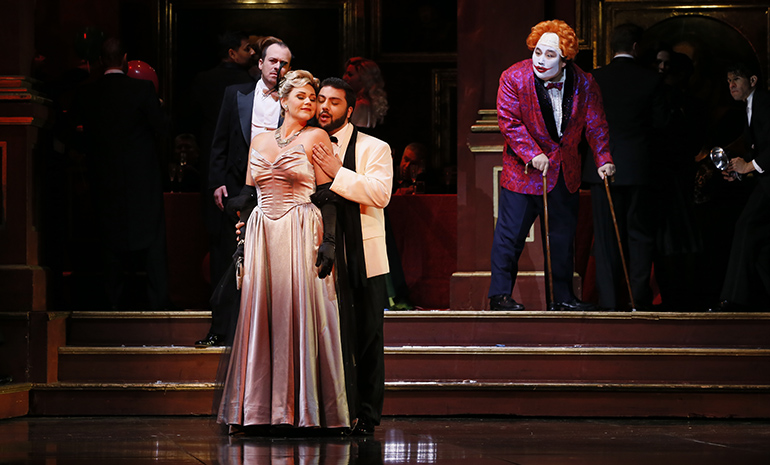 Leah Thomas as Countess Ceprano, Liparit Avetisyan as the Duke and Amrtuvshin Enkhbat as Rigoletto in Opera Australia's 2019 production of Rigoletto at Arts Centre Melbourne. Photo by Jeff Busby.

The sack is delivered, but when Rigoletto rips it open, THE DUKE IS NOT THE ONE INSIDE.

Lots of people are mad at lots of other people in this show, and since that assassin dude is strolling around just casually offering his services to random people on the street, it’s possible for any number of them to end up dead. BUT WHO?

I’m not going to tell you, because everyone knows the best part of Law and Order episodes is the major twist in the last two minutes, right before the screen cuts to black and Dick Wolf’s name appears. And Rigoletto has an amazing last two minutes.

The whole show is amazing, actually. Rigoletto is like 10 true crime documentaries and a whole series of Law and Order all crammed into 2 hours, with singing and music that makes you cry and suspense that keeps you gripped to the last second.

I can’t believe I’ve been missing out on opera this long because I thought it was only for snooty rich people. Opera is NEXT LEVEL AMAZEBALLS ENTERTAINING.

I will be going again for sure. And I will definitely wear sneakers.