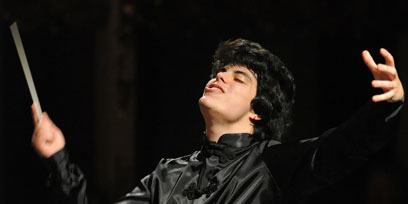 In 2012 he becomes, only 24 years old, the youngest conductor who ever tread the stage of the Teatro alla Scala of Milan, with Le Nozze di Figaro, and after a short time he made his debut with the Filarmonica della Scala in a symphonic concert.

From 2014 to 2016 he is First Guest Conductor of the Carlo Felice Theatre of Genoa. He has been First Guest Conductor at the Teatro Regio di Parma in 2011 and 2012, conducting its orchestra in many symphonic and operatic productions, in the occasion of the Festival Verdi and prestigious international tournée.

He believes that art belongs to everybody and that the widest audience has to approach her. He often brought Music in unusual places: he recently conducted the Orchestra Filarmonica della Scala in the Forum Assago in Milan in front of 8000 people; he played also with the Orchestra Sinfonica Nazionale della RAI the concert for the Italia’s 150 years of unity and independence in Piazza Castello in Turin with an audience made by over 25000 people; he was the first who conducted, in modern times, an opera in the Teatro Farnese in Parma; he inaugurated the new Opera House in Muscat, Oman; he conducted in every summer a symphonic orchestra on the mountains near Verona with the goal to bring to an audience of young people to the music.

Andrea Battistoni started his musical studies at the age of seven with Petra and Zoltan Szabò, continuing then at the Conservatory of Music “Dall’Abaco” of his city and graduating in cello in 2006, also attending master classes with the cellist Michael Flaksman in Germany, graduating in 2009. He began to study conducting and composition in 2004, training subsequently with Ennio Nicotra in Perugia and Russia, with Gabriele Ferro at Fiesole Music School in Florence, with Gianandrea Noseda at Accademia Musicale di Stresa. He was assistant of Piercarlo Orizio. In June 2008 he made his orchestral debut at “Michelangeli” International Music Festival in Bergamo with Orchestra di Padova e del Veneto and in October 2008, thanks to Maurizio Barbacini whom he was assistant, he made his operatic debut with La bohème at Basel Theatre.