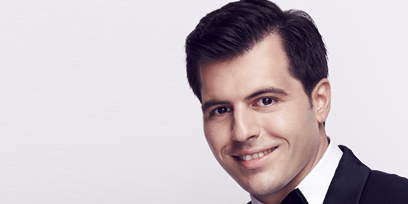 Mark Vincent burst onto Australian television screens with a moving rendition of ‘Nessun dorma’ on Channel Seven series Australia’s Got Talent in 2009. He went on to win the competition and was signed by Sony Music soon afterwards.

The only classical artist in Australian history to have released six albums by the age of 20, Mark has sold more than half a million albums worldwide.

His first album Mio Visione - My Dream reached number two on the ARIA album charts, followed by Compass, The Great Tenor Songbook and Songs From the Heart, which charted at number five, number 18 and number 10 respectively on the ARIA album charts. Mark’s 6th album, entitled Best So Far, is a collection of classic and contemporary songs from his previous albums.

Mark’s current album Together, a duet album with Marina Prior, was released in April 2016. The record debuted on the Australian Album Chart at #5, and #1 on the Classical Chart.

For the past seven years Mark has performed at the spectacular Carols in the Domain before a live audience of more than 60,000 people and a national television audience of millions.

In 2014, Mark made his musical theatre debut in the Australian production of Dirty Dancing, which played 110 shows around the country.

He supports the Save Our Sons Foundation, a charity he is very passionate about.