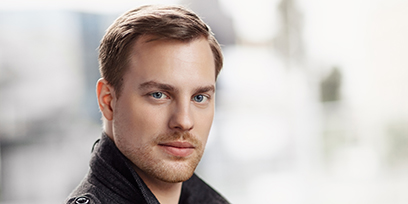 Since graduating from the Melba Conservatorium of Music in 2008, Nathan established his career in the Melbourne opera and oratorio scene. Nathan has won the National Liederfest, Australian Music Events’ Opera Scholar of the Year, the Royal Melbourne Philharmonic Aria, and placed 3rd in the Herald Sun Aria. He has performed with Opera Australia (A Masked Ball, Aida, Falstaff, Tosca, The Pearlfishers, La Bohème), Melbourne Opera (‘Schaunard’ - La Bohème, ‘Guglielmo’ - Cosi fan tutte), and in 2015 completed the Victorian Opera Developing Artist Program along with his Master of Music (Opera Performance) at The University of Melbourne. During his time at Victorian Opera, Nathan performed ‘The Baker/Billy Webster’ - Sunday in the Park with George, ‘The King’ - Puss in Boots, ‘Barone Douphol’ - La Traviata, ‘Father’ - Hansel and Gretel, ‘Bunyip Bluegum’ - The Magic Pudding – The Opera, ‘Young Recruit’ in Richard Mills’ Remembrance alongside David Hobson, ‘Sir Riccardo Forth’ - I Puritani, in the quartet for Weill’s Die sieben Todsünden featuring Meow Meow, ‘Le Roi’ - Cendrillon, and ‘Mr. Mayor’ in Richard Mills’ world premiere of The Pied Piper.

Nathan was the winner of the 2016 Australian International Opera Award. This prestigious prize allowed him the opportunity to study with highly acclaimed international tenor Dennis O’Neill at the Wales International Academy of Voice.

In March 2017, Nathan was involved in the inaugural release on the new Australian Sony Masterworks label. The album, titled Remembrance, features songs and poems in memory of the soldiers that fought in World War One, with Nathan featuring on ten tracks.

In August 2017, Nathan made his first appearance with Sydney Chamber Opera as ‘Tarquinius’, in their highly-acclaimed production of Britten’s The Rape of Lucretia.

By the Light of the Moon