Tosca: A fab season of Married at First Sight

Rosie Waterland was a guest of Opera Australia at Tosca at the Sydney Opera House. This is her unedited review of the experience.

Hello and welcome back to another edition of Sneakers at the Opera! This is the series in which a woman who watches reruns of The Golden Girls on her laptop while in the shower has been trusted with the noble task of reviewing the height of Australian arts culture… THE FRICKIN’ OPERA, BABY. And after 2020 pretty much took live performance and threw it into a vom-filled dumpster that was then hurled into the sun, it feels fitting that my first review of 2021 gets to be for one of the most epic (and operas are epic by default so that’s saying something) operas going…

Composed by Puccini (he’s an important opera guy — I checked), and directed by Aussie living legend John Bell, who has taken the original 1800s setting and switched it to Nazi-occupied 1930s Italy, if you’re thinking of dipping your toe into opera and aren’t sure where to start, may I calmly suggest YOU BLOODY WELL START WITH THIS ONE.

I have reviewed a few of these now (so humbly fancy myself a bit of an expert), but this was my date Jacob’s first time, and he started giggling with delight the second the curtain rose. Opera is such a feast for the senses, and he was so overwhelmed and excited by the whole thing, he could barely contain himself (which, despite the wine we had overlooking the Harbour Bridge before the show, is a typical reaction).

The sets are momentous. The singing is gorgeous (and surtitles make it easy to follow). The music hits you right in the chest.

Here’s the dealio, through a Married At First Sight filter to make it easier for my television-riddled brain to understand.

There’s this dude, Cavaradossi, who loves to paint, and just wants to spend his life painting and eating bread and cheese and drinking wine. Sounds lovely (trade ‘painting’ for ‘watching TV’ and I’m right there with ya, buddy), but, turns out Cavaradossi is like that one contestant on MAFS who says they ‘aren’t here for drama’ but somehow manages to be at the centre of any and all drama. 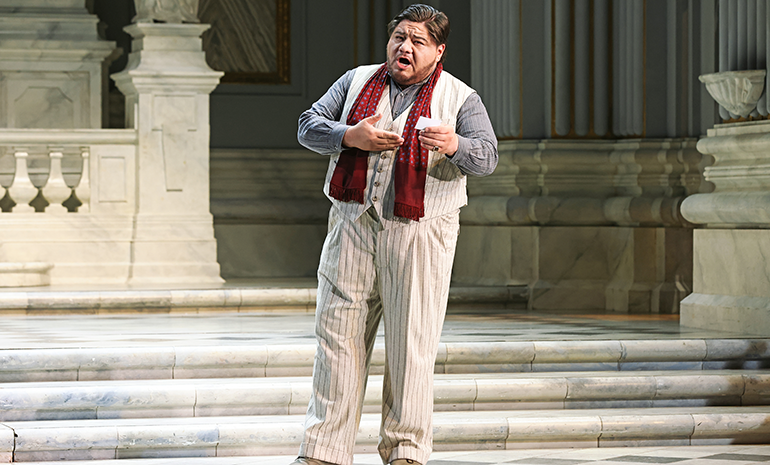 “Look, I know I said I wasn’t going to get involved in any drama this year, but I can’t help it that I was sitting at the table that Cyrell flipped when she got mad about that thing Jessika had commented on Martha’s Instagram Story. I DON’T WANT TO BE INVOLVED OKAY?” (Photo by Prudence Upton)

So obviously, as someone who just wants to paint and eat cheese and doesn’t want any drama, Cavaradossi is dating a woman called Tosca, who is basically the equivalent of that person on MAFS who constantly says things like, “I’M NOT HERE TO MAKE FRIENDS” while their left eye twitches slightly. It’s a reality TV producer’s dream that he paints portraits for a living, and she loses her mind whenever he paints anybody but her. 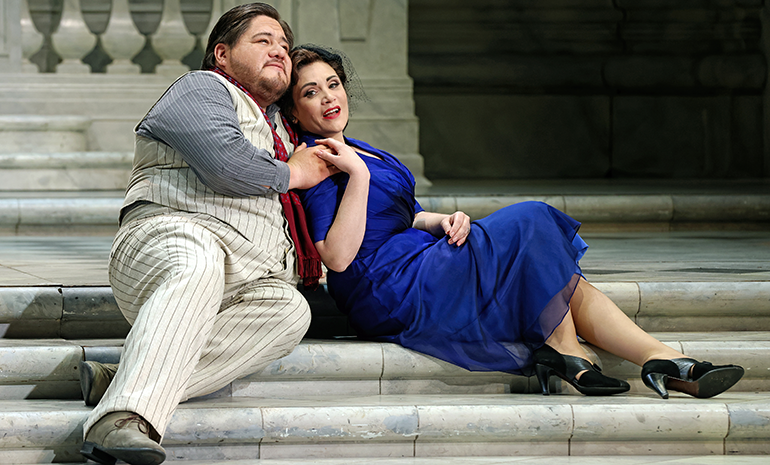 “If you paint anybody’s face but mine, I will throw my drink on someone and then talk about it on the Kyle and Jackie O show.” (Photo by Prudence Upton)

Of course, a woman comes into the church where Cavaradossi is working, and because he absolutely doesn’t want any drama, he paints her, which absolutely causes some drama. The woman is leaving some of her clothes for her brother Angelotti, who has just escaped from Nazi prison and needs to disguise himself to get away, and when Angelotti arrives at the church to pick up his disguise, Cavaradossi does what any solid cast member of a reality show does: HE INSERTS HIMSELF INTO THE ACTION.

Instead of being like, “Oh hey dude, your sister left you a dress to escape in, but I’m just going to pretend I didn’t see you and not get involved, because you know, the Nazis,” Cavaradossi is actually like: “OMG I totally just want to paint and don’t want to get involved in any drama at all but not only am I going to help you escape, I’m going to come with you and hide you at my very own house and I guess I’m front and centre of this storyline now and there’s going to be a Twitter hashtag about me when this episode airs whoops!”

If I just let you escape on your own, I’d be safe from the drama, but I also wouldn’t be #TRENDING (Photo by Prudence Upton)

Cavaradossi and Angelotti run off to hide, and when Tosca comes back to the church to find Cavaradossi gone, she is DEVO. No idea he’s trying to save a prisoner from Nazis, and convinced he’s run off with the woman he’s painted on his latest canvas, Tosca sings about how pissed she is, which is basically her ‘Get the cameras out of my face! I don’t want to do this anymore! Get this mic off me!’ moment with the MAFS producers. 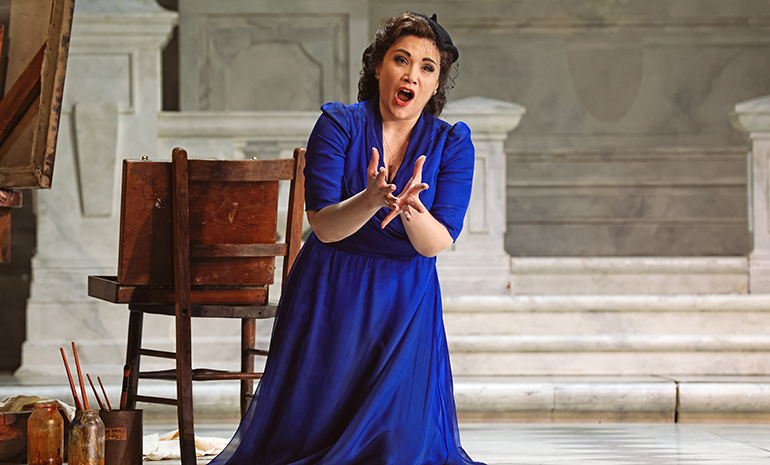 “I thought he was here for the right reasons!” (Photo by Prudence Upton)

Scarpia is buddies with the Nazis who have taken over Italy, and it’s his job to find Angelotti and take him back to prison. But when he sees Tosca singing in the church, he decides he might take a little break from hunting prisoners and attempt to hook up with her for a while — because what’s a season of MAFS without a misogynistic man who sees women only as physical conquests?!? Scarpia finds a woman’s fan and shows it to Tosca, convincing her once and for all that Cavaradossi has run off with someone else. A man gaslighting a woman in order to manipulate her sexually? Never! 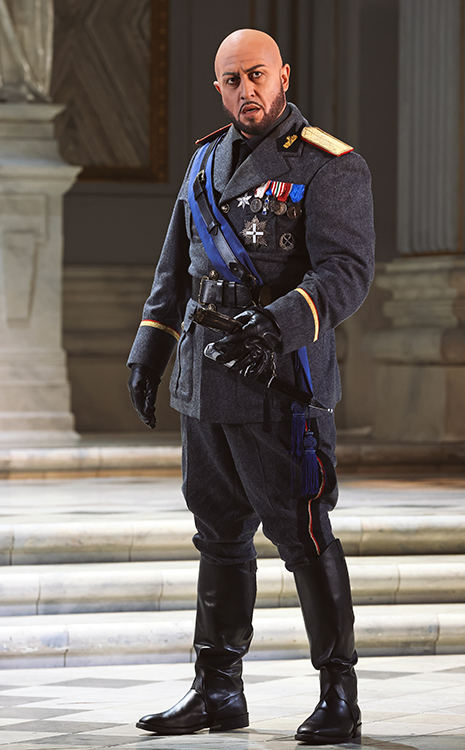 “I’m going to start an anti-feminist podcast as soon as filming is done.” (Photo by Prudence Upton)

But… SURPRISE TWIST! Tosca doesn’t fall for Scarpia’s bullshit. Turns out, despite her little jealousy problem, she really does love Cavaradossi, and didn’t just come on the show for the chance to sell tooth-whitening products on her Instagram. Cavaradossi and Angelotti are found and arrested, and Scarpia, who really is a sexist, predatory piece of shit (I mean, he is pretty much a Nazi, so that shouldn’t be a surprise), tells Tosca he’ll let her lover go, if she does one little thing for him… 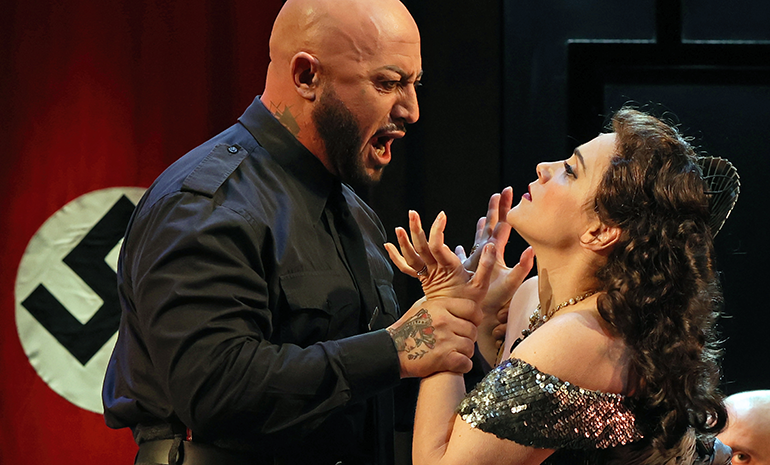 She would be the female contestant everyone tweets mean, misogynistic things about at the start, but then come to realise she’s actually pretty kick-arse (ie HOW EVERY AWESOME AUSSIE WOMAN IN TV IS TREATED) (Photo by Prudence Upton)

I don’t want to spoil the ending for you, but this is the bloody opera, so things are obviously going to be intense. Let’s just say that for the ‘contestant who says they don’t want any drama’, Cavaradossi ends up with more damn drama than every season of MAFS put together. And as usual, the woman at the centre of it all is maligned and misjudged and gaslighted and abused. I know I did this for lols, but it seems like a 1930s opera may be more like a 2020s reality dating show than I actually thought.

Well, at least some things have changed, right? At least in the 2020s there’s no racist facists trying to take over modern democracy! Oh, wait…

Tosca isn’t playing for long so I highly recommend you get your tickets ASAP. This has been my favourite opera I’ve seen so far, and I am technically now one of Australia’s preeminent opera reviewers, so I know what I’m talking about. Just make sure you wear your sneakers.