In Conversation with Lyndon Terracini

Listen to revealing conversations, surprise stories, and lots of laughs as our Artistic Director talks to some of opera’s most fascinating figures.

In Conversation with Lyndon Terracini is our podcast interview series featuring the extraordinary talents of Opera Australia — both onstage and off. Each episode features a special guest talking about how they came to work in the world of opera, and telling fabulous behind-the-scenes stories. Our guests include singers, conductors, musicians, composers, directors, designers, technical experts and more.

These conversations were originally filmed for a video series of the same name, which began in the early stages of the COVID-19 pandemic, when we were forced off stage.

New episodes are released every Monday and can be found on your favourite podcast apps.

Listen to In Conversation with Lyndon Terracini on:

There are few singers who have achieved the same career longevity as Graeme Macfarlane. For 47 years, he’s been singing tenor roles from across a broad repertoire, and is still going strong. In this interview, Graeme discusses making his Opera Australia debut in 1973 in War and Peace, our first production at the Sydney Opera House, and the changes he's seen over almost five decades as an opera singer.

The Opera Australia Orchestra is the busiest of all Australian orchestras. This extraordinary group of musicians is led by Concertmaster and Orchestra Director Jun Yi Ma. In this conversation, Jun shares stories from his life and career, starting with his days as a young violin prodigy.

Elena Kats-Chernin is one of Australia’s most successful and prolific composers, working across opera, concert music, ballet and film. She even composed our first opera for television, The Divorce, which aired on ABC TV across four episodes in 2015. Most recently, she won rave reviews for the score of Whiteley, our 2019 opera about the life and work of Australian painter Brett Whiteley.

Born in Mexico City, Diego Torre has been a leading tenor for Opera Australia since he made his Sydney Opera House debut as Rodolfo in La Bohème in 2011. Diego’s most celebrated roles include Radames (Aida), Turiddu (Cavalleria Rusticana), Canio (Pagliacci), Calaf (Turandot), and Cavaradossi (Tosca).

For five decades, Brian Thomson has been one of Australia’s most influential designers. He started his career in close collaboration with the director Jim Sharman and created designs for three of the biggest rock musicals of all time: Jesus Christ Superstar, Hair and The Rocky Horror Show. In the years since, he’s had an extraordinarily varied career, working on projects ranging from small-scale indie theatre to the biggest live performance events in the world, including the Sydney Olympics Closing Ceremony and several years of Handa Opera on Sydney Harbour.

Armenian-Australian singer Natalie Aroyan is one of the country’s leading sopranos, having taken on some of the biggest roles in the opera repertoire. But it wasn’t always her dream to be an opera star – instead, she had singers like Whitney Houston, Celine Dion and Tina Arena in her sights. In this fascinating conversation, Natalie reveals her journey from budding pop singer to centre stage at the Sydney Opera House. She talks about making her professional debut as Mimì in La Bohème, tackling the enormous demands of the title role in Aida, and learning her craft from opera world royalty.

Chen Shi-Zheng is a visionary in the truest sense of the term. The Chinese-born director is known around the world for the extraordinary universes he brings to the stage in his deeply moving productions. In this conversation, Chen reveals the life experiences that have influenced his unique perspective as a director. Starting with his turbulent childhood in China, Chen explains how he went from studying to be a Chinese opera singer to creating his own productions on the world stage. He also talks about his landmark production of the 22-hour Chinese epic The Peony Pavilion, and how it led him to direct Wagner’s Ring Cycle.

From 1970 until 2004, Anson Austin was one of our audience’s favourite singers. He tackled some 50 leading roles in his 34 years at Opera Australia and partnered with singers such as Dame Joan Sutherland and Dame Kiri Te Kanawa in everything from Puccini to Mozart and contemporary opera. Known for his effortless upper register, extraordinary versatility and professionalism, Anson has remained an essential part of our company since his retirement as a singer.

Australian soprano Julie Lea Goodwin has been one of our busiest singers since she joined Opera Australia in 2015. Last year alone, she performed an extraordinary range of roles: Maria in West Side Story on Sydney Harbour, Susanna in The Marriage of Figaro, Musetta in La Bohème, Madame Cortese in Il Viaggio a Reims, and Wendy Whiteley in Whiteley. In this interview, Julie Lea talks about handling such diverse repertoire, making her way to opera via musical theatre, and what attracts her to certain roles. She also offers a special preview of The Merry Widow, which she'll be starring in at the Sydney Opera House in January 2021.

Australian soprano Eleanor Lyons has an extraordinary career, which has taken her all over Europe and further abroad. Most recently, she’s performed as soloist in Verdi’s Requiem and Britten’s War Requiem with Philippe Herreweghe and the Antwerp Symphony; at the Grafenegg Festival, and with the Polish National Radio Symphony Orchestra in Katowice as soloist at their New Year’s Eve Gala with Australian conductor Matthew Coorey. In 2020, Lyons made her Opera Australia debut as Donna Anna in our production of Don Giovanni.

Since completing his masters of operatic and symphonic conducting at the St Petersburg Conservatoire in 2012, Australian conductor Vladimir Fanshil has built a richly varied career with some fantastic orchestras, including the Budapest Festival Orchestra, Mariinsky Theatre Orchestra, Odessa National Philharmonic and the State Hermitage Orchestra. In this interview, Fanshil talks about swapping the warm beaches of Bondi for the bitterly cold St Petersburg winter, studying with tough teachers in Russia, and the intersection of art, literature, poetry and music. He also talks about the differences in music culture between countries, and being based in Vienna.

Tahu Matheson has been with Opera Australia since 2007, and in 2017 became our Head of Music. In his time on our music staff, he’s taken on a diverse workload across a wide range of operas, overseeing rehearsals, preparing singers and conducting performances. In this interview, Matheson looks back to his early encounters with music and theatre, and explains how he came to be working in the world of opera. The interview ends with a special performance.

Australian-Mauritian soprano Stacey Alleaume is one of our busiest singers, with an ever-growing list of leading roles to her name. She was rehearsing to star as Violetta in our production of La Traviata on Sydney Harbour when the COVID-19 pandemic forced the cancellation of the season. In this interview, Stacey talks about her very musical upbringing, the opera traditions in Mauritius, and her recent experiences playing Gilda in Rigoletto at the prestigious Bregenz Festival in Austria. She also reveals what she’s been getting up to while in isolation, and performs a beautiful song by the Mauritian-born composer Francis Thomé.

Alexander Lewis is currently rehearsing for our production of The Merry Widow, returning as Count Danilo after originating the role in this production to great acclaim in 2017. The Australian tenor, known both for his performances in opera and musical theatre, has performed in some of the world’s most prestigious opera houses, including The Royal Opera House Covent Garden, The Metropolitan Opera and Komische Oper Berlin. In this interview, Lewis talks about growing up with Australian operatic royalty, returning to rehearsals after an eight-month break, and finding his own way into the world of music.

Gale Edwards has had the sort of career most stage directors dream of. For more than three decades, she's been one of Australia's most influential theatre-makers, having worked across all variety of performances; from large-scale operatic spectaculars, including our Handa Opera on Sydney Harbour productions of Carmen and Aida, to the most intimate of plays.

Paul Fitzsimon has been with Opera Australia since 2013, fulfilling a variety of roles including conductor and répétiteur. He’s currently our Chorus Master, responsible for ensuring that the glorious chorus you see and hear on our stages is prepared for any task. He’s also conducted performances for us, including Metamorphosis and The Merry Widow.

Technical director Clif Bothwell is responsible for bringing all of our large-scale productions to the stage and ensuring they run smoothly at every performance. His job is to oversee the teams who make the seemingly impossible possible every night.

In 2012, we set off on an adventure of operatic proportions: Handa Opera on Sydney Harbour. Conductor Brian Castles-Onion and singers Emma Matthews and Jonathan Summer share their experiences in this conversation. 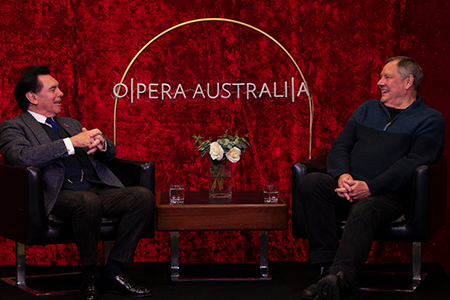 Watch In Conversation with Lyndon Terracini on OA | TV