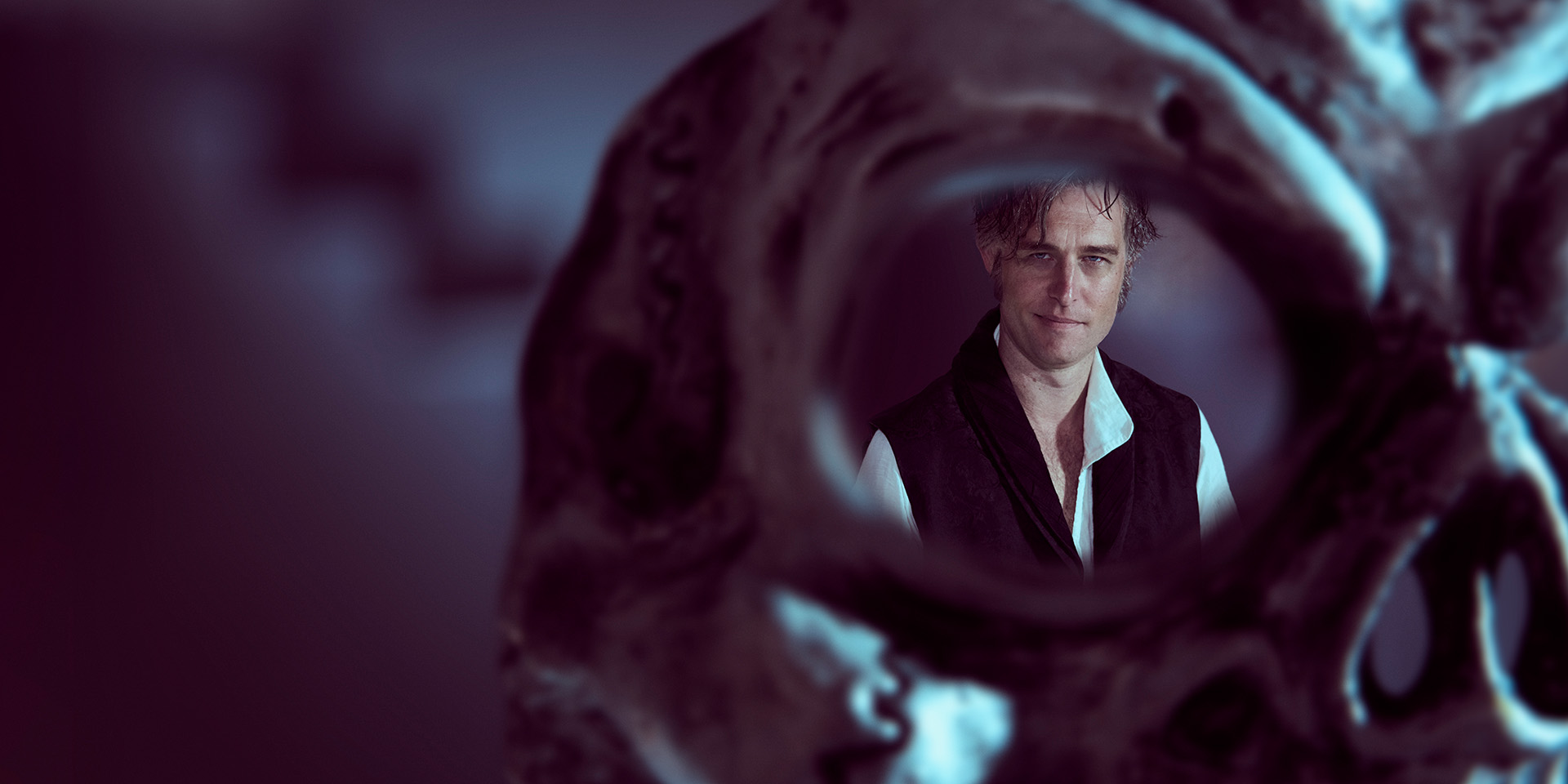 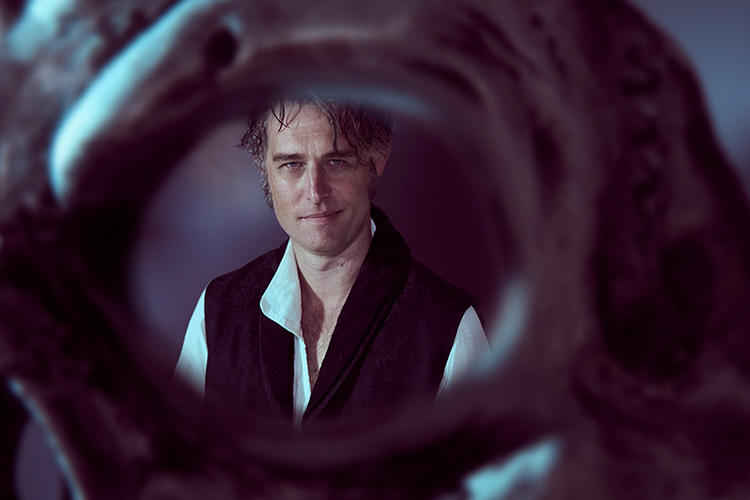 Approximately 3 hours and 20 minutes, including one interval.

He’s mad. He’s bad. He’s dangerous. But damn him to hell, his serenades are divine.

It’s the last day of Don Giovanni’s life, but he doesn’t know that.

For opera’s own Casanova, it’s just another day of pleasure seeking. Seducing a bride on her wedding day. Breaking into a woman’s bedroom in the dead of night. Killing her furious father.

Even before the curtain rises, Mozart reveals Don Giovanni’s fate. An earthshattering chord from the orchestra signals the gates of hell clanging open. The scoundrel’s debauched days are at an end.

When he hears a voice from beyond the grave, warning of impending punishment, Don Giovanni has no fear. Half-mocking, half-earnest, he invites the statue of the man he’s just killed to dinner.

Sir David McVicar’s production reveals the darkness in opera’s most compelling anti-hero. His Don Giovanni is a psychological thriller on a grand scale.

Monumental sets place the story in a gothic underworld inspired by the catacombs of Vienna. Monochromatic period costumes feature stunning embroidery. Can the characters keep their morals as tightly buttoned? 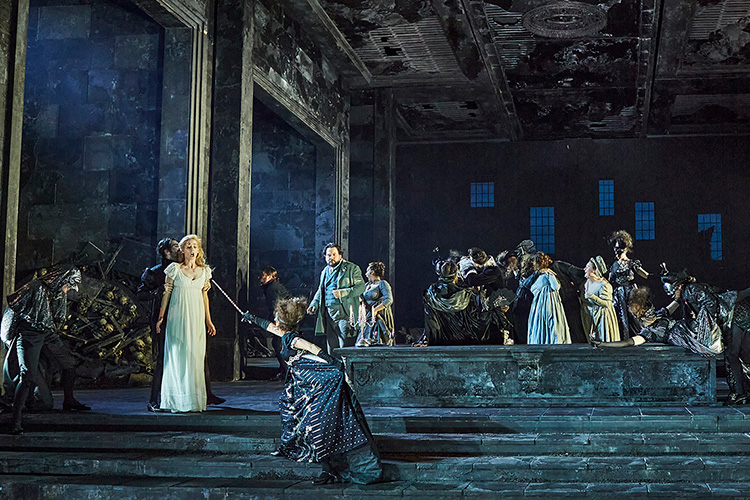 Here's everything you need to know about Mozart's hit opera.

What happens in the story? Who was the composer? What should I expect from the music? 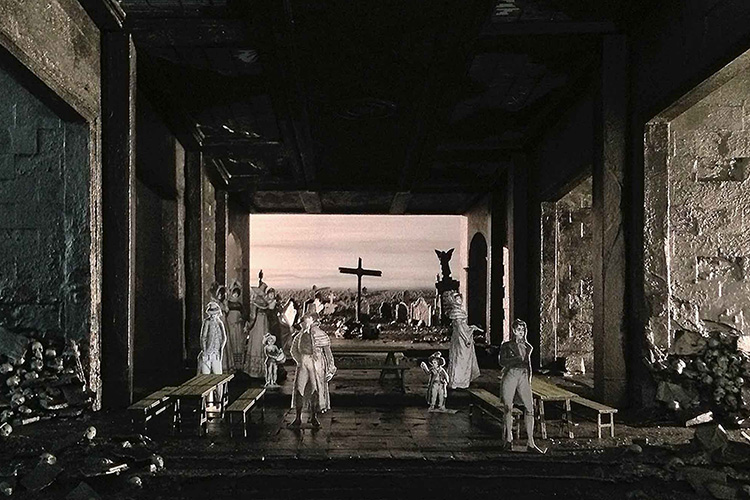 Here are just a few glimpses of the world of shadows Designer Robert Jones has designed for this production.

As dawn breaks, Don Giovanni and Leporello roam the streets of Seville. Don Giovanni senses the approach of a woman and they hide. Donna Elvira, a lady from Burgos, seduced and abandoned by Don Giovanni has come to Seville in search of him. Not recognising her at first, Don Giovanni makes an approach. She furiously accuses him but Don Giovanni manages to slip away into the night, leaving Leporello to explain his master’s true nature. He shows her a book, the catalogue of Don Giovanni’s innumerable conquests and leaves her crushed and humiliated. Donna Elvira swears to have revenge on Don Giovanni.

In a village near Don Giovanni’s palace, the peasants are celebrating the marriage of Zerlina and Masetto. Don Giovanni appears and immediately sets his sights on the bride. He orders Leporello to conduct the whole company to his palace to continue the celebrations but detains Zerlina by his side, to Masetto’s jealous fury. Alone with the peasant girl, he attempts to seduce her but is interrupted by the appearance of Donna Elvira, who denounces him and snatches Zerlina from his arms. Don Giovanni angrily makes after them but is distracted by the arrival of Donna Anna and Don Ottavio, both in mourning. Unable to recognise her assailant of the night before, Donna Anna appeals to Don Giovanni for aid in hunting down her father’s killer. Once more Elvira appears and desperately tries to convince them that Don Giovanni is a hypocritical deceiver. Her emotion gets the better of her when Don Giovanni accuses her of being a madwoman and she leaves in tears. Don Giovanni sets off after her, bidding Donna Anna farewell. Something in his voice betrays him and Donna Anna recognises the murderer of her father. She accuses him to Don Ottavio and furiously demands that he take revenge. Don Ottavio resolves to seek out the truth before taking such action.

Leporello has had a hard time entertaining the peasants, who are now roaming drunkenly round the palace and he complains bitterly to Don Giovanni when he arrives home. To further complicate matters, Donna Elvira has appeared with Zerlina in tow and he has had to skilfully manipulate her out of the palace and lock the doors. Don Giovanni is delighted that Zerlina has not yet evaded him and commands Leporello to organise a lavish ball for that evening.

In the palace gardens, Zerlina is pleading with Masetto. She asks him to punish her if he cannot believe in her innocence. Just as Masetto is won over, Don Giovanni approaches with servants. To test Zerlina’s fidelity, Masetto hides, leaving her alone to face Don Giovanni. He attempts once more to seduce her, pulling her towards the very spot where Masetto is hidden. Thwarted again, he can barely control his anger and commands the two peasants into the palace ballroom, where musicians can already be heard playing. Donna Elvira appears with Don Ottavio and Donna Anna, all of them masked. They mean to enter the palace in disguise and discover the true nature of Don Giovanni. Leporello spots them from a window and Don Giovanni bids them welcome to the ball.

In the ballroom, Don Giovanni and Leporello entertain their guests. Zerlina and Masetto fear the worst. The three maskers enter and are greeted warmly by their host, who commands the orchestra to strike up once more. As the musicians play aristocratic and peasant dances alike, Don Giovanni steals away from the room with Zerlina. Her sudden screams halt the dancing and Masetto runs desperately after his bride. Don Ottavio, Donna Elvira and Donna Anna cry for help and Don Giovanni appears, threatening Leporello, accusing him of assaulting Zerlina. The maskers reveal their identities and accuse Don Giovanni in turn. As a thunderstorm breaks over the palace roof, Don Giovanni is undaunted and unrepentant.

Back in the streets of Seville, Leporello has had enough and quits Don Giovanni’s service. A large bribe is enough to win him back however and Don Giovanni tells him his latest plan. Disguised in Leporello’s clothes he intends to seduce the maid of Donna Elvira. As darkness falls, Elvira herself appears at the window of an inn on the street and pours out her heart. She is unable to prevent herself from loving Don Giovanni. He takes the initiative and lures her down to the street by declaring his love and repentance; but the figure waiting below is in fact Leporello, dressed in Don Giovanni’s clothes. In the darkness, she believes that she is embracing her beloved. Don Giovanni, pretending to be a highway robber chases them away and settles down to serenade the maid. He is interrupted by the arrival of Masetto and a band of peasants, armed and hunting for Don Giovanni. In the guise of Leporello, he fools them into going separate ways, making sure Masetto stays behind. Alone with the peasant, he turns on him and beats him to the ground before running off. Zerlina appears and hears Masetto’s groans. She tends to his wounds and offers him consolation. They are finally reconciled.

Leporello and Donna Elvira have wandered by accident into the darkened courtyard of the Commendatore’s palace. Trying to shake her off, he vanishes into the shadows but is unable to find his way out of the courtyard. Donna Anna and Don Ottavio suddenly appear with servants and torches and Donna Elvira and Leporello hide. As the couple make their way inside the palace, Leporello tries to slip away, only to be discovered by Masetto and Zerlina. Believing they have captured Don Giovanni, they raise the alarm. Desperate, Donna Elvira comes out of hiding and pleads for her beloved’s life. The others are astonished, but at this point Leporello reveals his identity, to Elvira’s horror and shame. He narrowly escapes with his life by spinning a web of confusing excuses. He slips suddenly away into the darkness, pursued by Masetto and Zerlina. Don Ottavio has seen enough; he determines to go to the authorities and accuse Don Giovanni of the Commendatore’s murder. He asks the others to remain in the palace to comfort and console Donna Anna.

Alone, Donna Elvira struggles with her conflicting emotions. She loves and despises Don Giovanni at the same time, but above all fears that divine justice must surely strike her seducer down.

In the Commendatore’s palace, Donna Anna begs Don Ottavio to allow her time to grieve and assuage her pain before giving him her hand.

Don Giovanni sits down to supper, served by a ravenous Leporello, who steals mouthfuls of food when he believes his master is not watching. Suddenly Donna Elvira bursts in. Throwing herself at Don Giovanni’s feet, she begs him to mend his ways and save his soul. He cruelly mocks her distress and she leaves, cursing him. In the corridor outside she is heard screaming and Leporello is sent to investigate. He too cries out and rushes back into the chamber. He is incoherent in his terror and when loud knocking is heard at the door, Don Giovanni opens it himself. The Commendatore has kept his word and stands before him. The dead man returns Don Giovanni’s invitation and bids him dine with him in his house. Don Giovanni gives the Commendatore his hand in acceptance. His body is seized with convulsions as the Commendatore urges him to repent his sins and tells him that his final moment has come. Don Giovanni defiantly refuses. The earth opens and furies spring up and seize him. Don Giovanni is dragged below into hell.

With officers of the law, the others burst into the chamber. Leporello tells them that the fugitive is now far beyond their reach. Don Ottavio agrees to a year’s mourning before his marriage to Donna Anna. Donna Elvira resolves to live out her days in a convent. Zerlina and Masetto decide to celebrate at home in company and Leporello gets ready to go to the tavern to find another, less dangerous master. As one, they all sing the moral to Don Giovanni’s tale and go their separate ways.