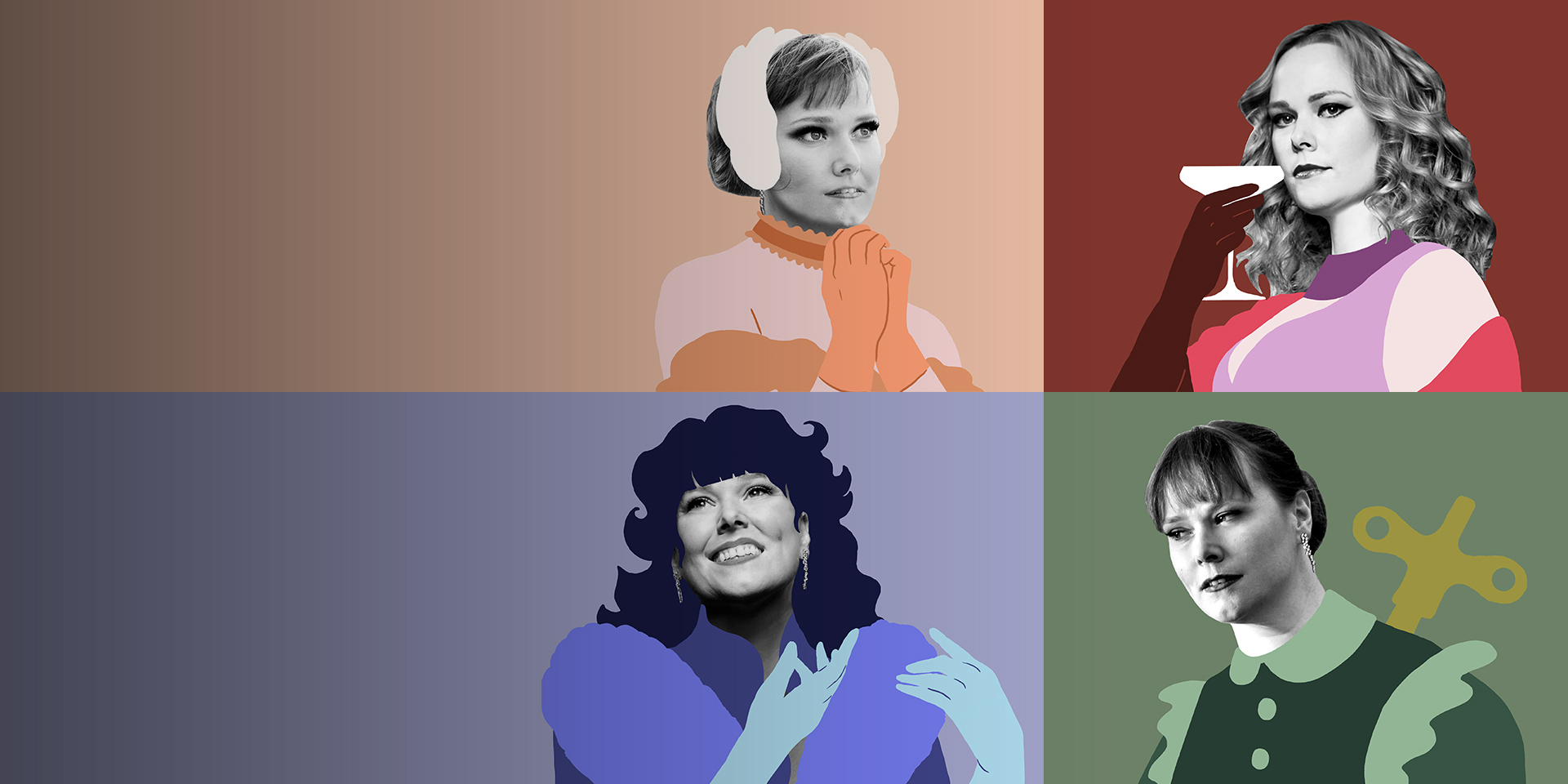 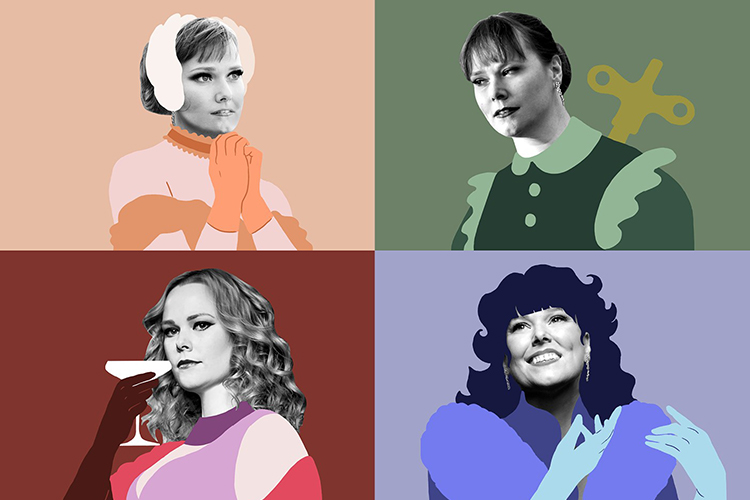 The Tales of Hoffmann Syndicate

Hoffmann is tipsy and in the mood for storytelling. He’ll tell you of his four great loves: a wind-up doll, an innocent singer, a cruel courtesan … and the woman who combines them all. But who is his mysterious muse? And the evil shadow that dogs his every move?

This is The Tales of Hoffmann: Offenbach’s last and greatest work. It’s an intoxicating mix of emotion and dazzling music, including the famous, fiendishly difficult Doll Song.

Soprano Jessica Pratt returns to Australia to sing all the female leads. It’s a rare soprano who can sing these roles and bring you deep into Offenbach’s emotional world. Pratt follows in the footsteps of Joan Sutherland and a handful of other stars who can pull it off.

“Pratt… (sings) all the female roles… with dramatic truth and with a vocal mastery worthy of the greatest” (ConcertoNet). 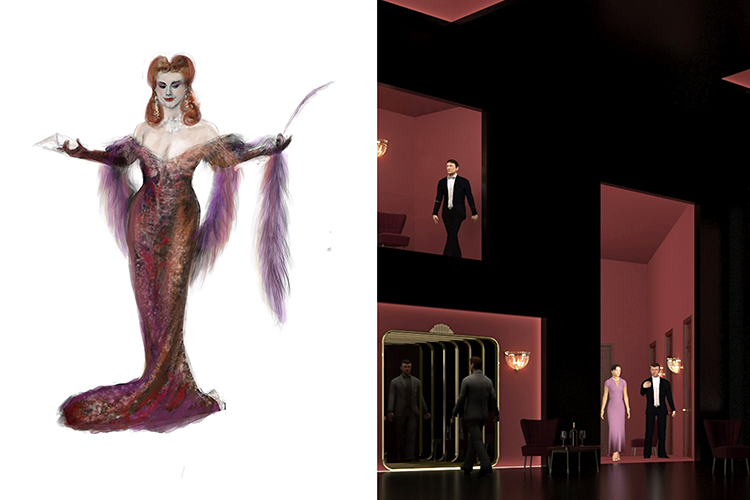 First Look: The Tales of Hoffmann

See the designs for our dazzling new production

Based on three short stories by E.T.A. Hoffmann, The Tales of Hoffmann sees a tipsy old man telling the stories of the four loves of his life. Each chapter has its own unique character, and bringing those to life requires a creative team with plenty of imagination.

The Spirits of wine celebrate as Hoffmann’s Muse descends among them. She declares her jealousy of Stella, the beautiful opera star, who she believes threatens her own supremacy over Hoffmann’s soul. She calls on the spirits to assist her in disposing of Stella’s unwanted influence. The Muse herself assumes the guise of Nicklausse, companion to Hoffmann.

A tavern, deserted at first. Counsellor Lindorf arrives and intercepts a letter Stella has written to Hoffmann. It contains the key to her dressing room.

The students enter, thirsty for refreshments during the interval of Don Giovanni. Hoffmann arrives, accompanied by Nicklausse. He is greatly affected by thoughts of Stella, whom he too has been watching at the opera. Although his friends manage to coax him into telling one of his stories — the tale of Kleinzach the dwarf — he cannot keep his mind off Stella’s captivating beauty.

Lindorf and Hoffmann come face to face and exchange insults. Hoffmann tells his friends that whenever he encounters Lindorf he is beset by misfortune, and this reflection prompts him to relate the tales of his three loves.

Spalanzani reflects on the fortune his new invention is going to make for him. It will compensate for the bankruptcy of his banker, Elias, through which he has lost five hundred ducats. His only worry is that Coppelius the spectacle-maker will demand a share of the spoils.

Hoffmann has become a pupil of the inventor in order to be close to his beloved Olympia, whom he takes to be Spalanzani’s daughter. While Spalanzani leaves with his assistant Cochenille to prepare for his evening guests, Nicklausse arrives and chides Hoffmann for lacking the courage to express his feelings openly.

Coppelius arrives with his speciality: magic spectacles. Hoffmann agrees to try a pair. He gazes through these at Olympia and is overcome by her incredible beauty.

Spalanzani returns to find Coppelius waiting for him. He turns the situation to his advantage by offering to buy out his rival’s stake in Olympia. He makes out an order for five hundred ducats payable to Elias’ bank. The deal is agreed and they part on good terms.

When the guests arrive Spalanzani presents Olympia to them as his daughter. By remote control the inventor sets Olympia singing, to great acclaim.

The guests go in to supper and at last Hoffmann is alone with Olympia.

Olympia’s responses to his questions lead him to believe that she reciprocates his love. Despite Nicklausse’s repeated warnings, Hoffmann remains obsessed.

Coppelius returns. He has discovered that Spalanzani has cheated him and, enraged, he takes his revenge by destroying Olympia. Hoffmann realises at last that his beloved was nothing but a mechanical doll.

Antonia’s father, Crespel, has brought her to Munich to shield her from Hoffmann’s influence. She is ill, and for her to sing could be fatal. Despairing, Crespel orders his servant Franz to let no-one into the house. Franz appears to understand this instruction and Crespel leaves.

Franz grumbles about his master’s demands and Hoffmann and Nicklausse appear unannounced. Hoffmann cannot understand why Crespel has whisked Antonia away so abruptly, and has tracked her down in order to discover the reason. Nicklausse’s skepticism is interrupted by Antonia’s entry. Antonia explains that her father no longer permits her to sing. She leaves hurriedly as Crespel returns. Hoffmann meanwhile hides, determined to solve the mystery.

Dr Miracle arrives. Crespel’s horrified reaction stems from the part Miracle played in the death of his wife. He is afraid of losing his daughter as well. Hoffmann and Crespel both look on aghast as Miracle ‘appears’ to examine Antonia. Crespel attempts to remove the evil physician from his house.

Miracle leaves and Hoffmann and Antonia are reunited. Hoffmann now understands Crespel’s motives, but he prefers to keep them from Antonia. He simply asks her to abandon hopes of future glory and to trust in him.

Miracle promptly returns to lure Antonia with the ‘forbidden music’. She resists until he conjures up a spirit to resemble Antonia’s mother. Antonia gives way. Miracle accompanies Antonia frantically while she sings. She collapses.

Crespel accuses Hoffmann of bringing about his daughter’s death; Hoffmann cries for a doctor to come and tend her… but it is Miracle who appears yet again, only to confirm that Antonia is dead.

In a Venetian Palace, Hoffmann declares himself to be through with love. Schlemil escorts the courtesan Giulietta into the gaming room. She invites all the other guests to join her.

Dappertutto declares that he will use a sparkling diamond to summon Giulietta. He commands her to trap Hoffmann. She has already obtained Schlemil’s shadow for Dappertutto, who now insists on possessing Hoffmann’s reflection.

Giulietta’s conquest is quick, as he capitulates to her seduction, and when with horror he realises what has happened, he remains trapped by his infatuation.

Hoffmann is challenged to a duel by Schlemil, a duel in which Schlemil is killed. Hoffmann is goaded by the mocking Dappertutto, whom he attacks. In the subsequent exchange Giulietta is mortally wounded. As Nicklausse drags Hoffmann from the scene of the murders, Dappertutto gloats in triumph.

Back in the tavern Hoffmann reveals that the three stories are different aspects of the same woman: Stella. Lindorf now realises that he has nothing to fear from his rival; when Stella appears at last, fresh from a triumphant operatic performance, Hoffmann, depressed and drunk, does not recognise her.

Stella and Lindorf depart together. Nicklausse changes back into the character of the Muse. In her true guise she sings a song of reassurance: through his suffering Hoffmann’s poetic art will flourish and he will eventually belong to her.